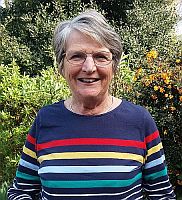 Judy is known to church members as one  of the welcome team and is also often involved in arranging parish meals. More recently she, along with Rochee Green, has taken responsibility for the Pop-up-Shop, and has been involved in the Come And… programme for primary school children.

Judy was born in Harrow and grew up first in west London and then in Essex. Although her family was not church-going she was baptised and went to a catholic primary school.  After secondary school in Southend (incidentally, the same school as Janet Stalker!) she began nursing training at St George’s in London, after which she trained for midwifery and then health visiting.

She met her husband Graham at Sixth Form club; their parents were friends. After marriage in 1970, they moved to Chelmsford where son Tim was born. Judy was doing health visiting and Graham worked in HM Customs. In the mid 1970s Felixstowe Docks were expanding and with it the HM Customs work; at the same time the new estate in Old Felixstowe was being built and so they moved to Felixstowe at that time. Second son Nick was born just after the move.

Graham and Judy became involved in the church in Felixstowe through sending the children to  Sunday School. Judy remembers the then vicar Roger Taylor encouraging her to be confirmed, and she has been involved in church more or less ever since. She did night shifts in Ipswich hospital while the children were small, and later worked at Orwell High School as their school nurse. She then spent many years community nursing in Ipswich.

I asked Judy about her Guiding activities: she said she had been a guide in Essex and soon got involved after moving here. She used to love camping and enjoyed working with the 10-14 age groups, as they are growing up and becoming more independent. She started a guide unit at St Andrew’s in the early 80s and many children of current church members have been her guides. She became county commissioner and is now county president. Her most recent assignment has been working to prepare the former Stoke Ash primary school to become a guiding residential centre.

Both sons are now married with children: Tim lives in Bosham (Sussex) with two girls aged 10 and 8; Nick in Pin Mill with two girls aged 9 and nearly 6 – these two can often be seen in church, or during the school holidays at the Pop-Up Shop with Judy.

Judy’s family have always sailed and have always had a boat of some sort; when the children were young holidays were always centred around boats. After Graham died in 2008 she recognized sailing would become more difficult but another exciting avenue opened up. 2010 was the centenary of Guiding and the organization chartered the Lord Nelson, a tall ship, and planned a circumnavigation of the UK in 100 days, in 10-day legs. The ship is designed to allow disabled and able bodied people to sail together.  Judy signed up for a trip from Whitehaven to Glasgow via Belfast, and remembers it being a very rough trip! She has sailed with the Jubilee Sailing Trust ever since, the most recent trip being  a 14 day trip sailing from Antigua to Bermuda.

When Graham was ill, and after he died Judy found great strength from her faith. She expresses her faith in everyday life in practical ways. Her hopes for this period as churchwarden include carrying on the good work from previous churchwarden John Beckett, and aiming that the church will continue to be a welcoming and comfortable place for people to worship the Lord and find support in their everyday lives.

We use cookies on our website. Some of them are essential for the operation of the site, while others help us to improve this site and the user experience (tracking cookies). You can decide for yourself whether you want to allow cookies or not. Please note that if you reject them, you may not be able to use all the functionalities of the site.