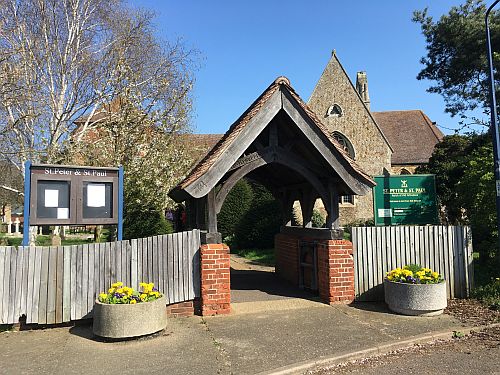 The Parish church of St Peter and St Paul has stood in Felixstowe Parish (now known as Old Felixstowe Parish) for over 700 years and is reputably the oldest recorded building in Felixstowe, although the site, it can be argued, was a place of pagan worship in Roman times and an early Christian church in Saxon times. The priory was mentioned on the site in 1105 but the current building in former guises was mentioned in 1362.

The building had been in use for 700 years. Various parts were added over the centuries including the Lych gate in 1919. In 1829 the interior was called “a little rustic” but today’s interior owes much to the interest of Lady Login in the 1860s and 70s in restoring the church opening in 1872.

In 1917 the organ took a direct hit from a naval shell but did not explode so the church was still standing today.

It is interesting to note the cyclical nature of the building in its regular redecoration and refurbishment about every 20 years and continual fundraising issues which remain today.

There may appear to be few changes apart from the building of the Link in 1987 and the remembrance garden in 1997 and the closing of the graveyard but each successive generation have developed and changed the building to suit their worship needs.

So the changes are more defined in the Parish church of St Peter and Paul maintaining that constant witness and presence of God for the people.

Many hold the place with special regard for the numerous family connections over the years in baptisms, weddings, funerals and burials.

We use cookies on our website. Some of them are essential for the operation of the site, while others help us to improve this site and the user experience (tracking cookies).

You can decide for yourself whether you want to allow cookies or not. Please note that if you reject them, you may not be able to use all the functionalities of the site.